For decades, the entertainment industry has reinforced America’s Christmas ethos, depicting the season as a time for generosity, kindness, and joy. But now, some daring directors and producers are disrupting the holiday spirit with a darker Yuletide narrative and character: Krampus.

Once you reach a certain age, Christmas pop culture gets predictably repetitive. All the Christmas TV specials you can name off the top of your head are designed to inspire nostalgia and joy; the same can be said for traditional Christmas movies.

Director Michael Dougherty explains that, “Christmas movies exist in their own little snow globe, wherein a clashing family, no matter how sick of each other, always manages to overcome their differences and live happily ever after.” This more or less holds true for all Christmas specials, whether the main character is an outcast reindeer with a noticeable genetic mutation or a walking, talking skeleton who wants to try spearheading a different holiday.

These common practices reinforce America’s longstanding Christmas ethos, but it also reflects a much larger story-telling practice: the feel-good, good-guys-always-win story. But anyone who keeps up with film knows there are plenty of examples where the bad guy wins. Hannibal Lecter unarguably comes out on top in The Silence of the Lambs; Chigurh achieved his homicidal goals in No Country For Old Men; the devil’s cult in Rosemary’s Baby gets their antichrist; and the Joker succeeds in sowing chaos throughout Gotham City in The Dark Knight.

While this approach to storytelling – where the villains succeed in thwarting their heroic counterparts – is easy enough to find in typical movies and shows, the Christmas narrative has been left untouched by this method. Recently, however, a dark figure has emerged in pop culture with a singular goal: disrupt the holiday season. His name is Krampus, and he’s almost as old as the Santa Claus story itself.

Krampus was long regarded by Germanic folk as Santa Claus’s dark helper. Half-goat, half-demon, this horned creature played punisher while Santa played gift-giver. Krampus was said to have carried bundles of birch branches, which he used to swat ill-behaved kids. He also carried a sack or basket, which he used to transport bad children to Hell, to his dinner table, or the bottom of an ocean. 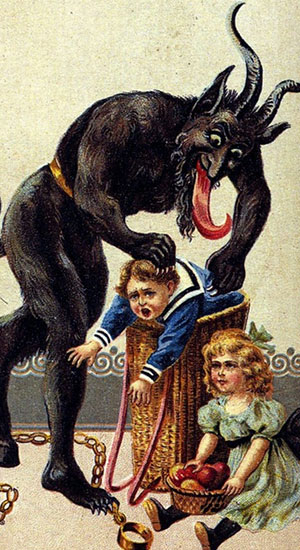 Krampus is a gruesome figure by any measure, thus he was banned from Christmas paraphernalia by Germanic governments in the early 20th century. That’s also why Krampus in pop culture has been such a rare occurrence: he’s not what we would consider a kid-friendly character.

Krampus is back, though, making several appearances in TV and film. He’s shown up in satirical animated shows like “American Dad”, and even got his own feature film in 2015. Putting Krampus in pop culture is a powerful way for directors and producers to disrupt the feel-good Christmas story (even if he doesn’t always come out on top). Inserting Krampus into a film or show or making him the focus is an effective way for directors to deliver critiques of contemporary Christmas culture, create a more holistic picture of Christmas, generate some laughs through sadistic slap-stick comedy, or just plain scare people.

However particular directors, screenwriters, or producers utilize the Christmas devil, Krampus’s appearances in pop culture are inherently disrupting. Whether through humor or horror, he temporarily forces audiences to view Christmas through a different lens. Moreover, though, by temporarily dethroning Santa Claus and the holiday season from their sacrosanct positions, Krampus is the ultimate bad-guy-wins character. Whether he accomplishes his in-story goals, the Christmas devil’s very presence temporarily elevates the bah-humbug spirit – and as far as the holidays are concerned, that’s the ultimate bad-guy-wins story.

To illustrate the point, here are Krampus’s 6 biggest appearances in pop culture to date. Fair warning, though, this article does contain movie and TV show spoilers. Proceed at your own risk. 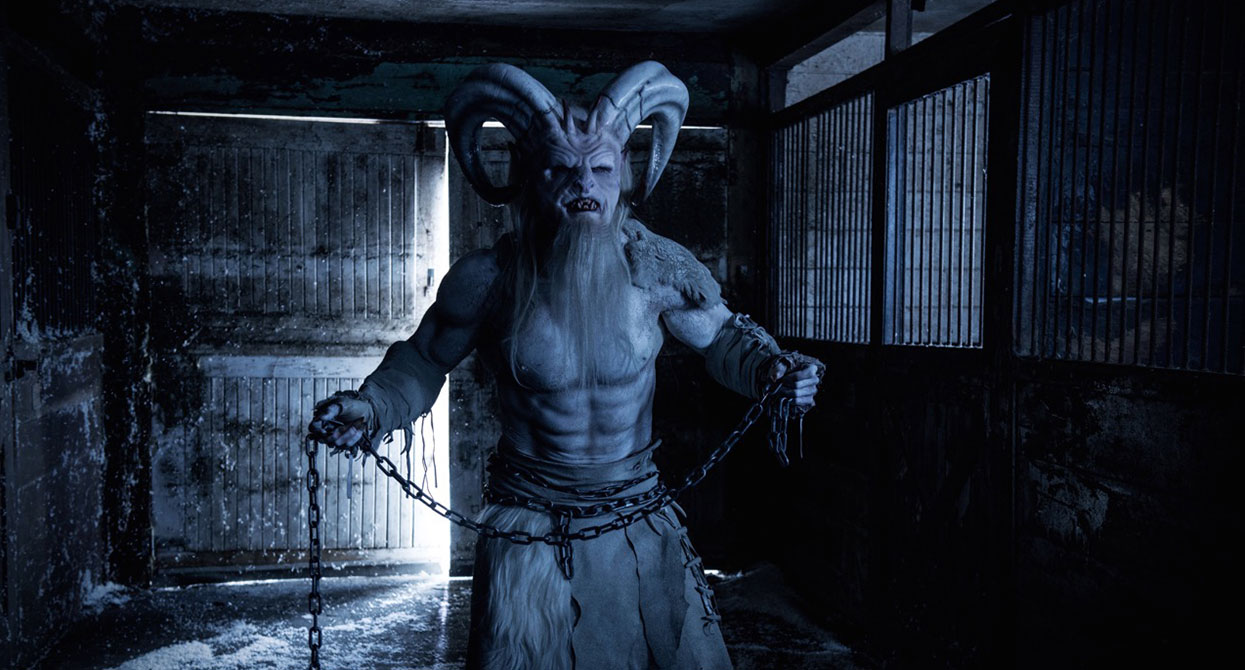 Krampus was a true monster in A Christmas Horror Story.

This anthology film, directed by Grant Harvey, Steven Hoban, and Brett Sullivan, features Santa’s cloven-hoofed “helper”. In this Christmas-horror anthology, the infamous demon of Christmas torments a family who behaved badly when they visit their elderly Aunt. The film does take some creative license with the creature; as the entire family is killed, and one of the youngest family members transforms into Krampus then attacks her Aunt. As far as Krampus in pop culture goes, the Christmas demon definitely disrupts the season: an entire family is slaughtered, and the feel-good, happy ending Christmas story simply doesn’t manifest. 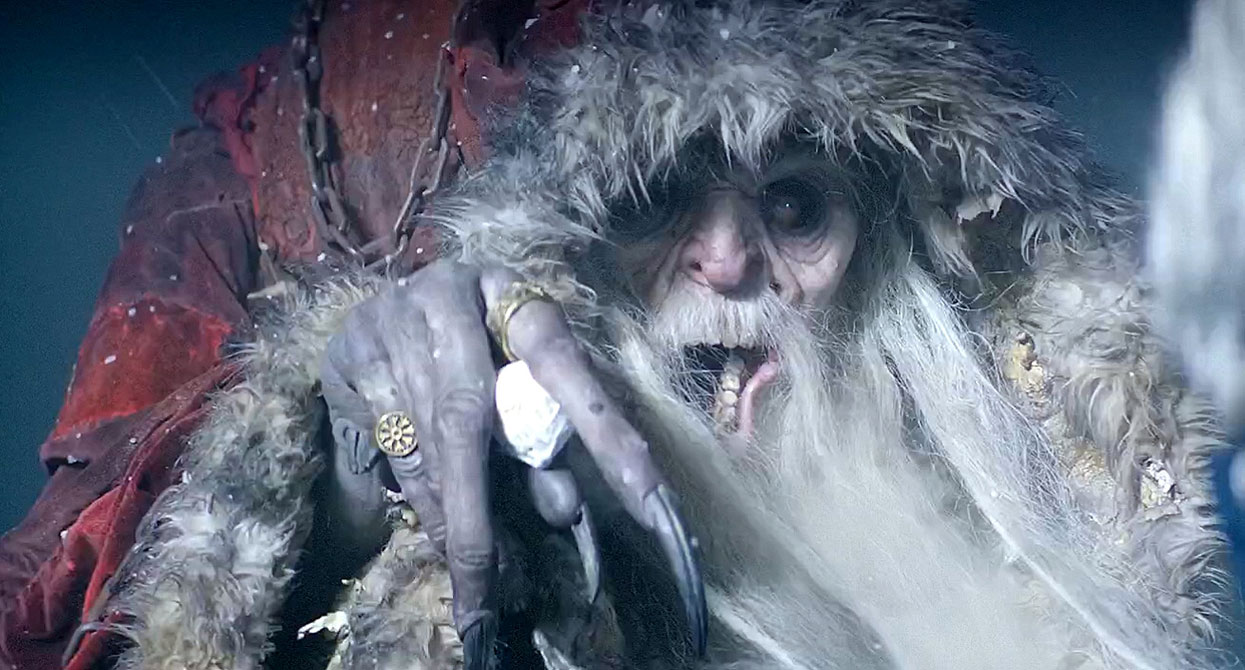 Krampus, dressed in Santa-like garb, made it his job to punish those without Christmas Spirit.

Yet another family story, this 2015 film, directed by Michael Dougherty, depicts Krampus as a monster who punishes families that “lose their Christmas spirit”. One by one, Krampus and a cadre of demonic toys, evil gingerbread men, and malicious elves capture the film’s main characters. Just when it seems the family is consigned to damnation, one of the children wakes up. Everything appears normal, but when he opens his presents, he discovers an ornament created by Krampus. As it turns out, Krampus is watching them and several other families all year long. No one gets a happy ending in this film. 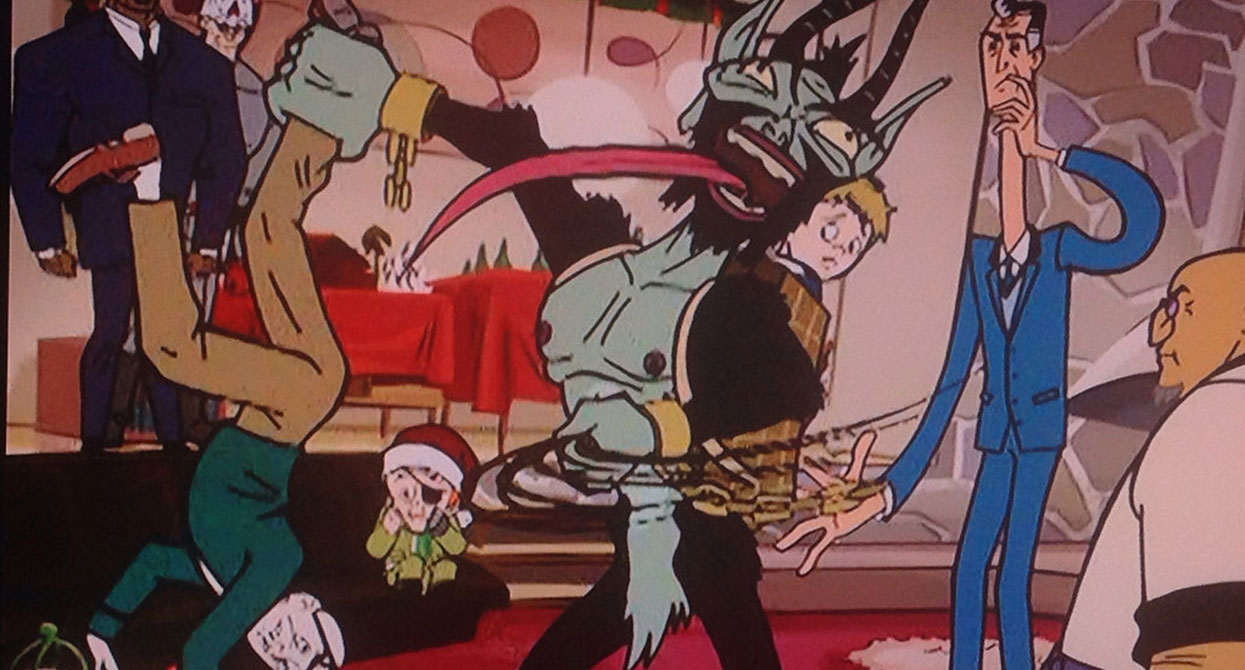 Is this supposed to be scary or hilarious? It’s hard to tell.

Adult Swim’s television series “Venture Bros.”, directed by Jackson Publick and Ian Jones-Quartey, puts a humorous spin on the Krampus tale. Dr. Venture’s sons, Dean and Hank, accidentally read an incantation from a mystical book out loud, unintentionally summoning the hairy monstrosity, who’s intent on disrupting Christmas-business-as-usual. Krampus decides that Dr. Venture was the naughty one, and begins assaulting him with a handful of birch sticks (he also does a few other…inappropriate things). After the clock strikes mid-night, he leaves the Venture compound, but not before placing a baby Jesus figurine back in the manger…which causes the building to explode. 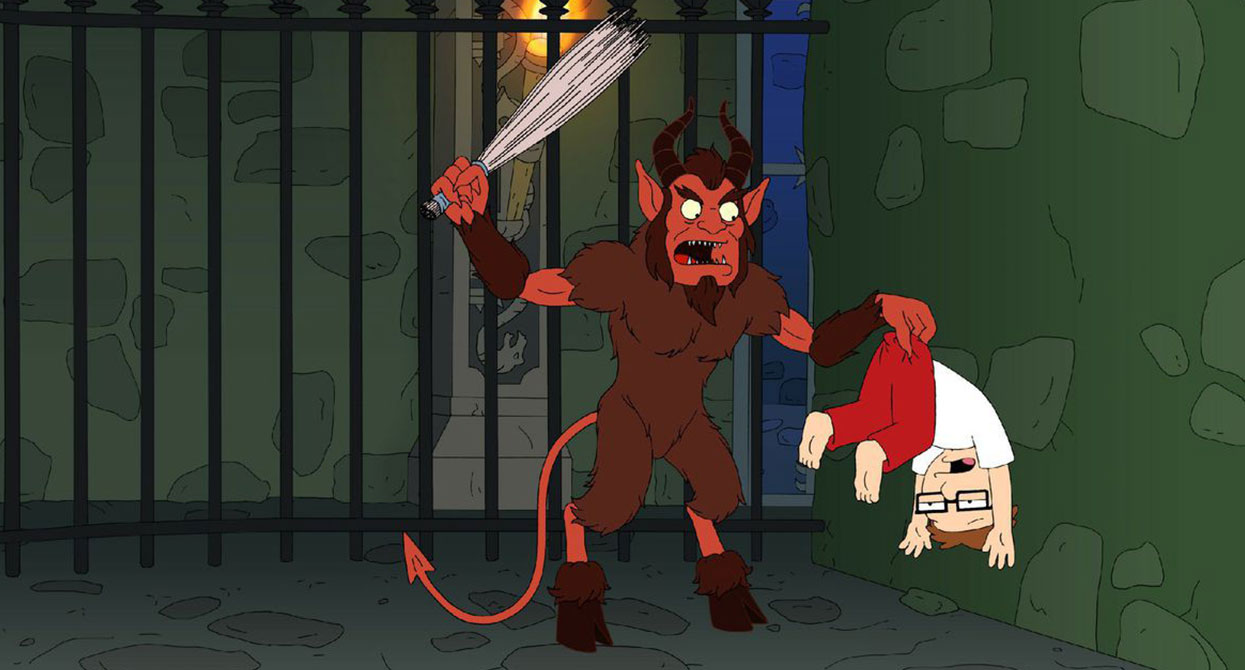 Krampus was actually a very soulful character in this “American Dad” Christmas special.

Krampus’s appearance in “American Dad” is comical, morally enlightening, and challenging to the Christmas narrative. When Steve – the son of CIA agent Stan Smith, the “Dad” in “American Dad” – is kidnapped by Krampus, Stan teams up with Santa Claus to kill the surprisingly musically talented monster. At Krampus’s lair, the anthropomorphic household goods (in an obvious homage to Beauty and the Beast) show Steve that Krampus only punishes naughty children so they grow up to be well behaved.

Seth MacFarlane discards the idea that Christmas shows need to be feel-good and family friendly. Throughout the episode, Steve thinks he can get away with acting like a brat yet still get his presents. And once it’s revealed that Santa is a shill for the toy industry, it becomes abundantly clear why he wants to eliminate Krampus. In this case, the Christmas devil turned into Seth MacFarlane’s vehicle for delivering a powerful critique of contemporary Christmas culture.

If you thought “The Venture Bros.” version of Krampus was funny, you clearly haven’t watched “The League”.

A group of friends (Pete, Kevin, Ruxin, and Taco) find themselves at the mall doing some Christmas shopping. Taco is amazed that there is a Mall Santa but there is no Mall Krampus. Taco tries to convince the Mall Manager to hire him as the Mall Krampus, but the manager quickly declines. Taco disregards the Mall Manager’s beliefs and decides the mall absolutely needs a Krampus. Bursting out in a giant purple mascot costume dressed in a Santa outfit, he attacks all the children, Santa, and anyone who gets in his way. 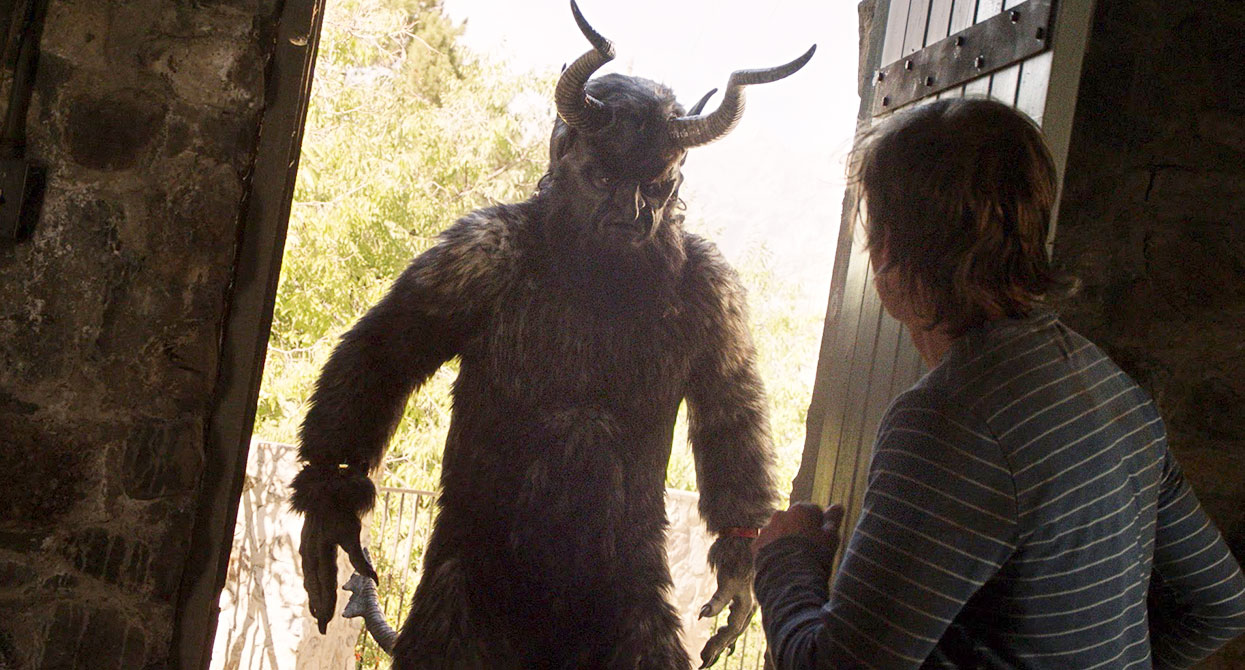 This incarnation of Krampus may have a point about Christmas.

In this story, Krampus is a tyrannical, Christmas-hating fiend. Think the Grinch, except far less funny. The Aquabats get lost on their way to a Christmas tree lighting ceremony and end up in East Krampton. They found out that Krampus took over the town and permanently banned Christmas.

Krampus is the bad guy in this story, but his intentions aren’t malicious. He eventually reveals that he banned Christmas because people were no longer interested in punishing children for bad behavior; on the contrary, he saw kids practically getting rewarded for naughty behavior. In other words, the show’s writers – Christian Jacobs, Gerard Way, and Jason DeVilliers – disrupt our usual thinking about Christmas, inviting their viewers to reflect on contemporary holiday culture through an unlikely figure…at least until Santa beats up Krampus and hands out gifts indiscriminately (which, of course, just proves Krampus’s point).

Fascinated by the appearance of Krampus in pop culture? There’s more insightful analysis where that came from. Sign up for our email newsletter to keep up with the latest film & TV insights and production tips. 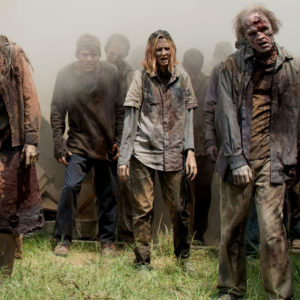 Exclusive Special Effects Makeup Tips from a Hollywood Pro. Special effects makeup is the key to any good horror movie,...