The opening sequence of a film can leave you settling in for the long-haul or scrambling for the door. Which is why so many great films are remembered not for how they end, but for how they begin.

It is widely known that first impressions matter, and it could be argued that there is none more important than the first impression one gets when sitting down to watch a film. In truth, a movie’s opening sequence can be one of the most important parts of the film, as it often introduces – or dangles – select pieces of the story that is to come. It sets a pace, establishes a mood, and prepares the audience for the journey they’re about to go on. And ultimately, it is an invitation to stay, get comfortable, and enjoy the ride.

Deciding upon the best of the best is a daunting task, and somehow subjective when it comes right down to it. So instead, we’ve compiled a selection of iconic opening scenes representing diverse genres, each of which could be considered a shining examples of a great opening scene in its own right. Combining cinematography, sound design, and music, these first impressions have left a lasting and indelible mark upon us all.

Considered to be one of Alfred Hitchcock’s greatest thrillers, Vertigo opens with a suspenseful chase scene on the rooftops of San Francisco. We are immediately introduced to the overall theme and feeling of the film without making it obvious. The dizzying use of camera angles also shows just what Scottie sees when looking down from above, and demonstrates why the film is entitled, well, “Vertigo”.

Disney/Pixar films are notorious for bringing about feelings of nostalgia and happiness. “Up” does a complete 180˚, giving us an unexpected turn of events from what we usually anticipate in an animated film. The un-dialogued montage adds an emotional element, in that it allows the audience to interpret the depth of Carl’s love for Ellie and how she inspires his actions later in the film. Have your tissues handy, ladies and gents.

The Sound of Music

Sure, what you see is Maria gallivanting amongst the hills as she sings the titular song. But what makes this opening scene so amazing is its use of wide shots to capture the majesty of what makes the hills “alive.” Maria’s freedom and running also exemplifies her free spirit, joy, and resistance to rules: a theme that is echoed in her relationships in the abbey, with the Von Trapp family, and when facing the Nazi regime.

Masked bank robberies have been used before, but this one sets the tone for this gritty, dark comic book movie. This scene gives insight to the mindset of Batman’s ruthless nemesis, The Joker. The Clown Prince of Crime, as he’s also known, viciously disposes of his accomplices. The clown masks, so similar to his own make-up and persona, shows he’s got a perverted sense of humor. The one lone bank manager who fights back represents the good in Gotham who will stand up for what’s right, how ever bad the odds. The exit scene is another show of the Joker’s humor, using a bus designed to carry children as a getaway vehicle for a robber who looks like he should be entertaining kids. The symbolism, pace and unsavory elements lets the audience know this will be a bumpy ride.

The Spy Who Loved Me

There is no better representation of the action packed in Ian Fleming’s novels than in “The Spy Who Loved Me.” This opening scene exhibits Agent 007’s dedication to MI6 and his stealthy, expert use of technology, both of which epitomize the James Bond franchise. But the intense chase through the snowy mountains, ending in a thrilling jump off of the cliff and the accompaniment of the iconic theme song, prepares us for what’s ahead and keeps us rooting for Bond’s triumph throughout the entire film.

This film transformed how horror movies were made. In this opening scene, the audience is drawn in with the calm, soothing voice of the caller. The caller makes Drew Barrymore’s character feel comfortable and then uneasy, and the scenery does the same with the mist over the pool, the darkness outside, and then the persistence of the caller. The popping/burning of the popcorn mirrors the intensity of the scene. The audience knows what’s going to happen, just not when, and this suspense is built masterfully.

The scrolling text and John Williams’s remarkable music welcome every fan to the Star Wars films (other than Rogue One). It’s hard to believe, in these days of computer graphics, that this scene was made by rigging a camera on a track that rolled toward the artwork that was on a six foot-long piece of cardboard. This scene introduces the audience to the Star Wars universe; it’s unlikely heroes, R2D2 & C3PO; and the frightening villain, Darth Vader. It also creates intrigue when a yet unknown Princess Leia secretly meets with C3PO.

Stanley Kubrik took Arthur C. Clarke’s screenplay and created an epic science-fiction movie that to this day stands as a masterpiece of filmmaking. (Little known fact: it was Carl Sagan who originally proposed that the film “suggest, rather than depict,” extraterrestrial intelligence.) And while the film in its entirety is a classic, it’s the opening sequence that is the most famous, most controversial, and most interpreted and re-interpreted as to its meaning and symbolism. We’re not going to jump into the debate here, but suffice it to say, the scene speaks for itself, and you can evolve your own opinions.

When it comes to hand-held, visceral intensity, Director Joe Carnahan wrote the book on it with this opening chase scene that is as gripping, gritty, and truth-shattering as they come. In fact, “Narc” could be a good example of a film not living up to its opening sequence, as what followed could be thought of as tame in comparison. Still, many consider the film a true American Classic, filmed on a shoestring budget, with story-telling and acting as compelling as they come.

It is widely accepted to be one of the greatest, most suspenseful, and never-going-into-the-water-for-the-rest-of-my-life opening scenes of all time, yet very few know the actress’s name who delivered it so “swimmingly.” (Susan Backline, by the way.) Steven Spielberg had his directorial coming out party with this film, choosing to utilize one of the simplest tools of all – music – to instill terror into everyone who watched . A relatively young (at the time) composer, John Williams, assembled the score out of two simple notes and went on to win an Academy Award for it. “Jaws” is a perfect example of visual and sound coming together to scare the bejeezus out of everyone – and setting the tone for the suspenseful film that was to follow.

With a breakout performance by Ewan McGregor, this opening scene gives you a glimpse into a Scottish heroin addict’s world. You get the feel of the fast pace, the confusing cuts between scenes, and the insightful monologue by Mark Renton (McGregor). This opening lets you know what is needed at the end; as Renton says, “Choose Life.”

Once Upon a Time in the West

Take. Your. Time. It’s the legendary mantra of this classic opening sequence which sets the standard for building tension through camera angles and beautiful sound design rather than a dialogue-heavy drawn-out scene. Throughout the 12-minute-long opening, time feels endless as a story unfolds and the tension builds. But it is not the climax that makes this scene so compelling – its the process and the pace at which we are carried along up to it.

Despite a strong cast of Henry Fonda, Jason Robards, Charles Bronson, and Claudia Cardinale, Director Sergio Leone’s epic Western was far more successful in its European release than it ever was in the U.S., as it was considered a financial flop domestically. However, the movie is now generally regarded as a masterpiece and one of the greatest films ever made, being selected in 2009 for preservation in the United States National Film Registry by the Library of Congress. 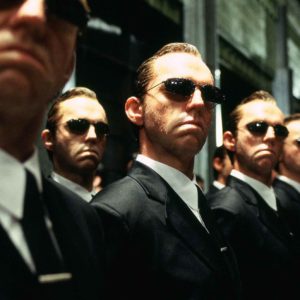 What do you love most about your favorite movie?  Is it a plot twist or brilliant line of dialogue?  The lead actor’s...