SPOTLIGHT ON: The Line Producer

There are a wide variety of different jobs that are critical to the intensive process of both film and television production. Once a film or television script has been written, the executives at the respective networks and studios have signed off on it and “greenlit” the budget and cast the show, the production process begins, which means a crew is hired to actually bring the pages of the script to life. Hundreds of skilled people regularly work on these major film and television productions and one of the most important roles on the set is that of the line producer, who is often the epicenter or this wildly exciting process.

What Does a Line Producer Do?

As their name suggests, the line producer’s primary job is to “watch the line.” What that means, to those who don’t know the entertainment business lingo, is someone who makes sure the production stays on the budget that was proposed to the network, studio or financiers. Spending too much money and going over budget can lead to the project not being complete, which is an utter failure for a line producer. Now, staying on budget is the ultimate goal—getting to that goal by the end of the production forces a line producer to have a hand in every facet of the film or television production itself.

Supporting the director’s vision and ushering a film into production can be a daunting task with details ranging from filming locations, crew hires, and administrative aspects among other things. LP Rachel Brenna outlines the role of a line producer as the following:

“Basically, a Line Producer (LP) does a thorough breakdown of the script, which can then translate to a real schedule and a budget. The LP manages the budget, the insurance, the union contracts, the equipment and the payroll. The LP negotiates with Department heads that the Producer and Director want to bring on and also does some of the hiring (in most cases, I have done almost all the hiring). Essentially, the LP is the project manager of all the production-related elements.”

How Do They Do It?

HIRING THE KEYS: Line producers are in charge of hiring the entire crew who they believe can best help them achieve the goal of staying on budget and creating the best possible show. As crews on a set are broken down in a natural hierarchy, line producers will often hire department heads who will be in charge of different aspects of the production itself. These are often known as keys, like a key grip, key art, key makeup, a gaffer, a cinematographer, and so on—though most of these hires will also be done with the input of the other producers, director and executives at the studio or network. These hires will be based on skill and experience, as well as the amount they can pay.

FALLOUT THE PRODUCTION: Once these keys are hired, the other roles who will work in each department will also be hired in the correct number for the production to be pulled off. Money will be budgeted for stages on the production studios/lot or other physical locations; for meals; equipment; props; set building; transportation; insurance requirements; and anything else the show may need to be completed safely and efficiently. Knowing the cost of different aspects of a production, based on research, past experience in production and the creative details of the project itself, are all critical for the ultimate goal of staying on budget and producing the best film or television show possible.

Busy LP Mon Alonso offered advice to budding line producers, “Through the years I’ve learned how important it is to think ahead of your directors and have contingencies on your budgets. Contingencies are key on production budgets as most of the time the success of any project/production will be determined by the bottom line.”

SCHEDULE THE SHOOT: The other major component of line producing is scheduling. The number of shoot days are decided upon in the all important phase known as pre-production and if the schedule disseminates from this, it will usually cost the production more money. So staying on schedule is something the line producer is responsible for, though they will have help from other key crew members, like the Assistant Director.

How Do You Become a Line Producer?

As the line producer is one of the bosses on a film or television set, a fair amount of experience is required to get this job. That means an individual needs to start at the bottom as a production assistant for a few years, working as many jobs as they possibly can. The next step would be as a coordinator and then the next step would be as an associate producer or a production manager.

Once you have years of experience, have worked on a wide variety of productions with a wide range of budgets, only then will you be able to land steady work as line producer on major film and television productions.

One of the key reasons line producers are successful is that they feel a sense of urgency towards the role. Television line producer Steven Ramey notes, “I think you have to be able to handle stimuli from different directions because you’re overseeing components that have to come together in order to put the show on.”

Avoiding the White Screen of Death: Screenplay Writing Tips for the Novice Screenwriter 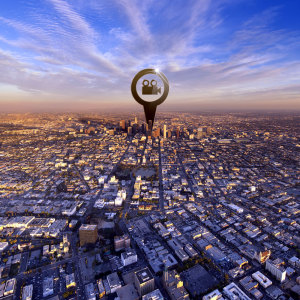 The verdict is in: Downtown Los Angeles is home to Five out of the Top Ten Most Popular On-Location filming sites in the LA area...