After sifting through the amazing submissions from dozens of talented, young filmmakers, The LA Center Studios Young Filmmaker Competition found a documentary that simply grabbed our attention and hearts with its artistry and subject matter.

Jillian Corsie submitted her feature-length documentary, Trichster, to the Young Filmmaker Competition almost immediately. Having recently completed the documentary detailing the lives of seven individuals suffering from Trichotillomania, Jillian hoped her film would be chosen among other feature-length and short films. As the director, producer, and editor of the documentary, Jillian showed a high level of professionalism and the end product demonstrates that beautifully.

Trichotillomania is a disorder where sufferers pull out their hair and pick at their skin. This includes scalp hair, body hair, eyebrows, and eyelashes. The ultimate takeaway being that this is a behavior that the sufferer cannot control. They can’t simply stop pulling. Jilian’s film Trichster examines the toll this disorder takes on people afflicted by it and how those same individuals lead their lives.

When we asked Jillian why she was inspired to make this film, she told us, “Growing up I had a childhood friend who suffered from trichotillomania. In the beginning, no one knew it was a disorder so she felt very alone. Watching her struggle was terrible and I felt helpless. I made Trichster to raise awareness of trichotillomania.

I didn’t want to see one more little girl suffer the way my friend did. So many people are unaware that this disorder even exists. I want to change that.”

Portrayed in a sensitive manner, “trich” sufferers are given a voice in Jillian’s documentary for the very first time. Because of the isolating nature of the disorder, very little research has been done on Trichotillomania; but now with new interest being generated there’s a new opportunity to provide support to those afflicted with Trichotillomania. 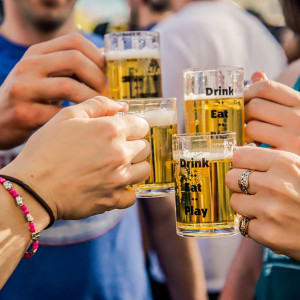 The beginning of April brought out droves upon droves of beer fans, beer makers, and oh did we mention beer? Hosted by Drink.Eat.Play....