Once you know which job you want, and you’ve begun exerting tremendous mental energies on learning everything you can about that job, then you need to start learning who is who on the food chain. You need to start making the effort to make contact with those who can hire you for an entry-level position. How are you going to get a Hollywood intern?

Hollywood has produced some pretty incredible talent from the depth of the intern pool. Not to say success is a given, but its nice to know the possibility is there.

All mentors have a way of seeing more of our faults than we would like. It’s the only way we grow.” – Padme

An intern? You know … a trainee. You’re Luke Skywalker to their Yoda.

To get the Hollywood internship you need, you need to network. Why? Because there are a thousand other people who want the same job that you do. The competition is fierce and sometimes it just isn’t about what you know, but who you know.

Most of the time, it’s a combination of the two.

If you are a college student going into your junior year, or if you are a graduate student who has completed your first year, you have some options others don’t. You may … just may … be able to get yourself an internship with one of the many studios in Los Angeles, or with a major production company.

Why would you want to do this?

The answer is simple. Steven Spielberg.

He started as an intern at Universal Studios. If that doesn’t show you how starting as a Hollywood intern can begin your journey to the very top, we’re not sure what can.

From a practical point of view, moving up through the studio system can give you invaluable insights into the film making business in a few weeks. You’ll have the opportunity to work around production executives who regularly make well-known blockbuster hits. In other words, your Hollywood internship is your opportunity to gain contacts that will serve you well in years to come. (Provided, of course, you don’t get fired early on. Don’t be lazy; do more than is expected of you, and you’ll do well.)

In a dark place we find ourselves, and a little more knowledge lights our way” – Yoda

Getting an internship with one of the top studios can be extremely competitive. While it is worth the effort, you should do your due diligence. Not all studios treat their interns the same. This means calling each studio to ask about their respective internship programs. Ask about whether the internship is paid or unpaid. This is an important question these days. Some studios pay their interns, and others don’t.

You need to know your rights. A 2013 court ruling was made to protect interns from unscrupulous studio behavior. In fact, the New York Times reported that, “a Federal District Court judge in Manhattan ruled on Tuesday that Fox Searchlight Pictures had violated federal and New York minimum wage laws by not paying production interns.”

Thankfully, some studios are very up-front about the fact that they pay (or don’t pay) their interns. You can usually find out about their policies on their website. If not, don’t be afraid to call and ask.

In my experience, there’s no such thing as luck.” – Obi-Wan Kenobi

What do you do if you’re not destined for a Hollywood internship with a big studio?

The truth is that there are a lot of production companies out there that have studio deals. Working with them is just as valuable. Check out the credits of films you like. Look up the names of the companies on IMDB.com (don’t have an IMDB Pro account? Maybe it’s time you get one) and see who these companies have done business with, and whether they have a studio deal in place.

If IMDB Pro doesn’t have the information you need, do a simple Google search for companies with deals like this. Once you have your list, then it’s time to write up, and fire off, a short letter to the individual in charge of hiring interns at each company. (Don’t know who that is? Pick up the phone and ask. It’s important to address your letter to the correct individual. It shows you have at least a small brain on your shoulders and can do your homework.)

Once you get your internship, don’t slack off. Make yourself invaluable! Going the extra mile gives you a great first impression, and impressions count when there are hundreds of other people vying for the same internship! Be polite, and be persistent.

Remember, “A Master without an apprentice (intern) is a Master of nothing.” You heard it from Emperor Palpatine. This is your chance to make connections that can last a lifetime, and that can help skyrocket your career.

From the Winner's Corner 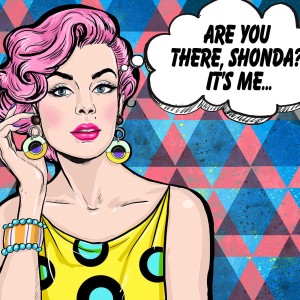 Last month we started sharing some first-hand experiences of women in film and some statistics backing up the claim that...